Doreen and myself sea-watched from 07.10-08.40: Bob visited Whitbread Hollow

Gannet 1 E
Mediterranean Gull 1 ad s/p W
Auk Sp. 4 E
Razorbill 1 close in on the sea and being attacked by a G.B.B.Gull

Also 1 Stonechat along the road. 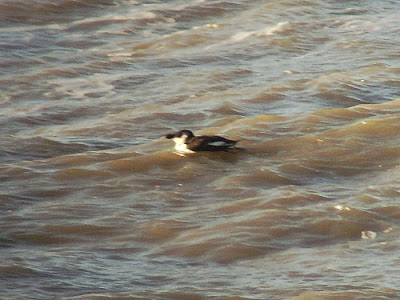 Razorbill off Birling
unfortunately attracting the attention of a first-winter Great Black-
backed Gull every time it surfaced. (taken by DC) 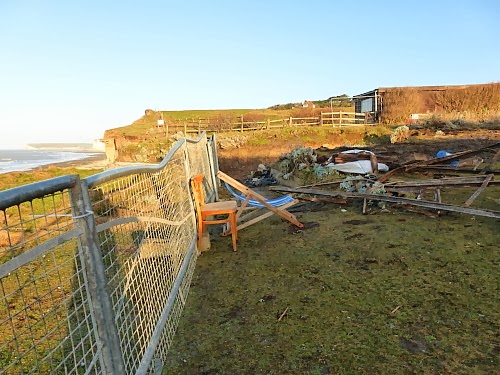 Sea-watch hut now demolished is this an end of an era. 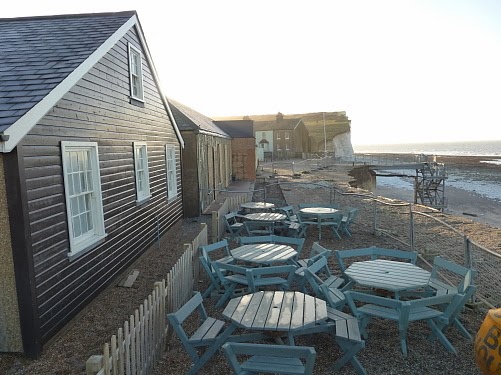 After all the dreadful weather we have been having this year, today was superb and the best so far this year.
We sea-watched from 08.30-09.15 but unfortunately very little seen and we then covered Birling lane and walked up to the gully leading to Belle Tout lighthouse with the highlight being a Small Tortoiseshell butterfly.
A Canada Goose was stood directly below the cliffs on the shingle, maybe our first record of a Canada Goose seen on the ground at Beachy.

We met Mr Nash who lives at Birling, and he informed us that the Black Redstart has been present on and off in his garden for several weeks this year.

With another cliff fall at Birling overnight, decided to take several photographs as the sea-watch hut is now too dangerous to use, and the National Trust have started demolishing the front of the Hotel. We shall miss very much the sea-watch hut. 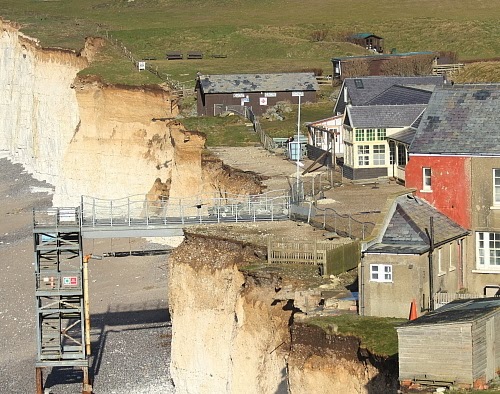 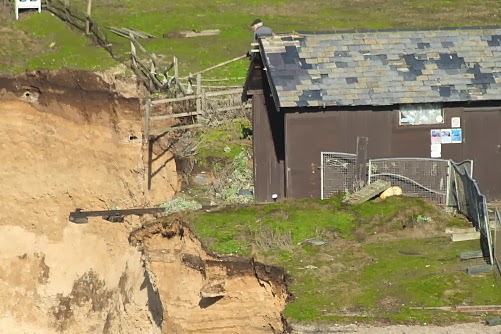 The sea-watch shed with the exposed safety boat rails exposed
over the edge of the cliffs. 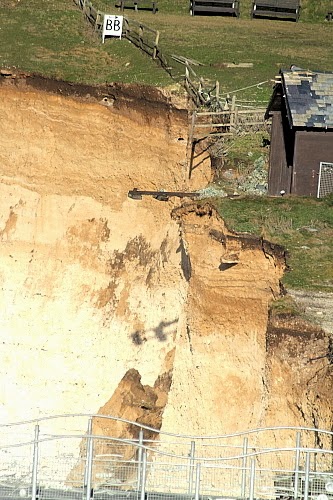 The sea-watch hut virtually on the edge of the cliffs with yesterday's
cliff fall underneath the hut. 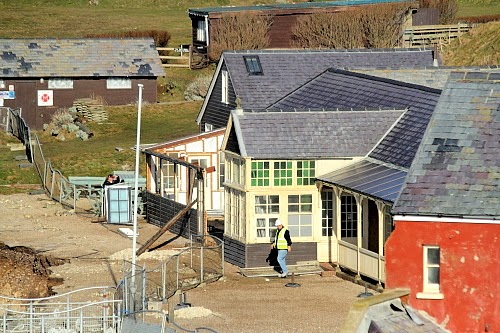 Work started on demolishing the front of the Hotel before it
disappears over the cliff. 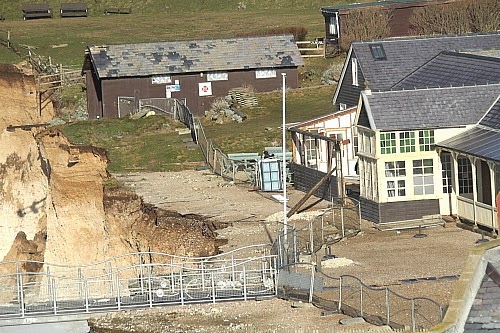 The steps leading down to the beach have now been closed off
with no current access to the beach. 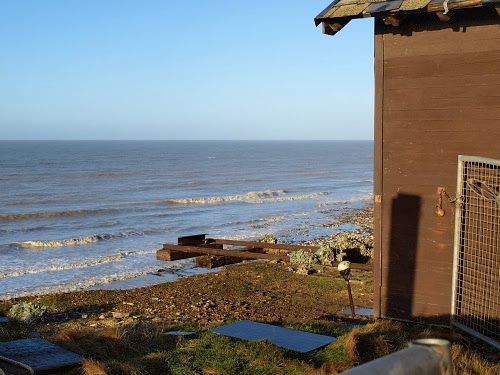 (TEC)
View from the front of the hut. 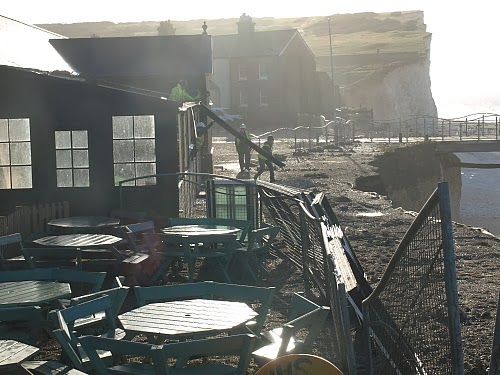 (TEC)
Workmen demolishing the front of the hotel. 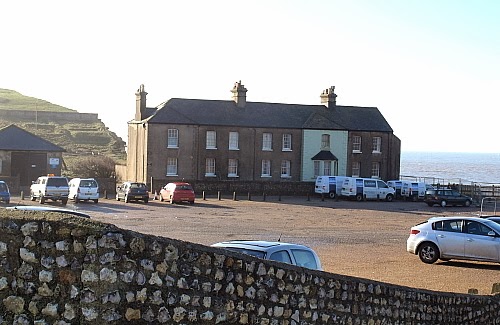 (TEC)
The right hand coastguard cottage will now have to be demolished.
with some of the wall at the back has now disappeared over the cliff. 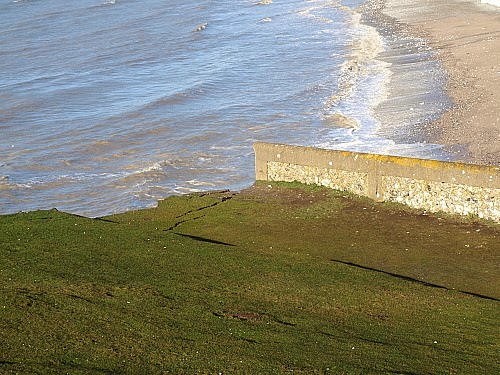 (TEC)
The section behind the wall is likely to be the next section to go. 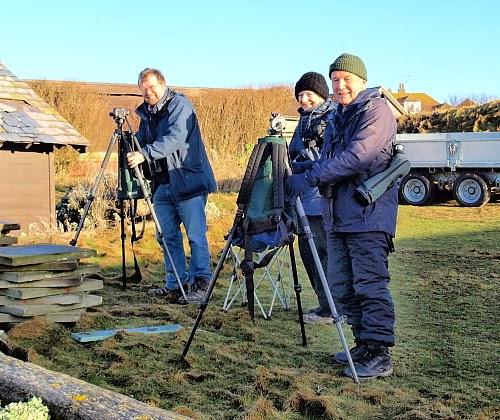 (TEC)
DC, BK and JFC preparing for a sea-watch, outside the hut,
they are only smiling as they saw the Chinese Pond Heron on Friday. 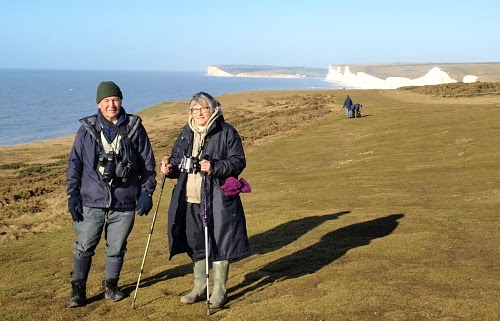 (TEC)
JFC and DRC in their 55th year of birding at Beachy Head.
Can anyone beat that in Sussex.