We covered all the usual sites on the Headland. Several night migrants were seen including 2 Sedge Warblers and also a juv. Yellow-legged Gull was present on the cricket pitch at East Dean briefly.
Overcast conditions kept the butterfly numbers low: 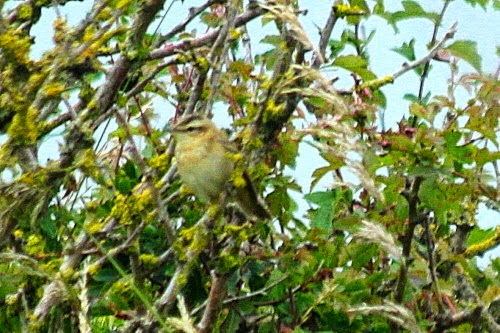 Our first Sedge Warblers this Autumn. 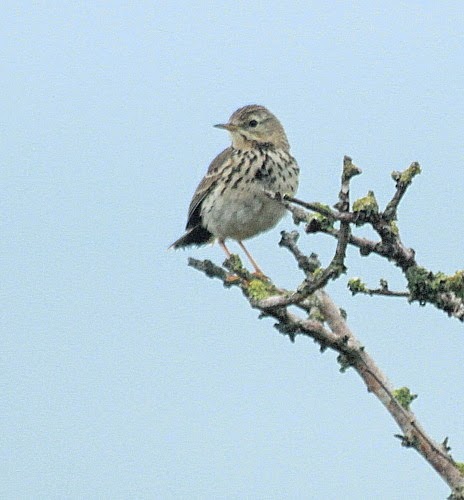 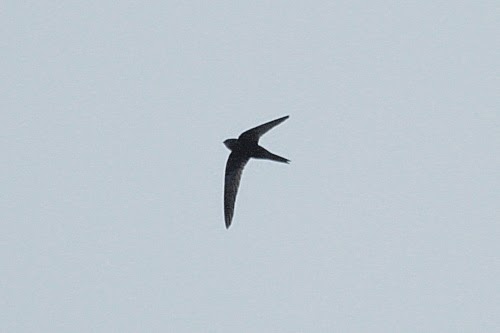 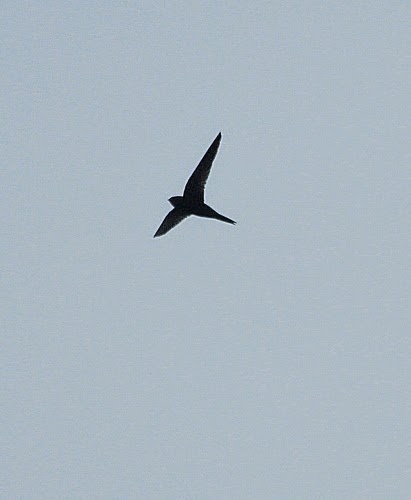 Swift over the cliffs at Belle Tout 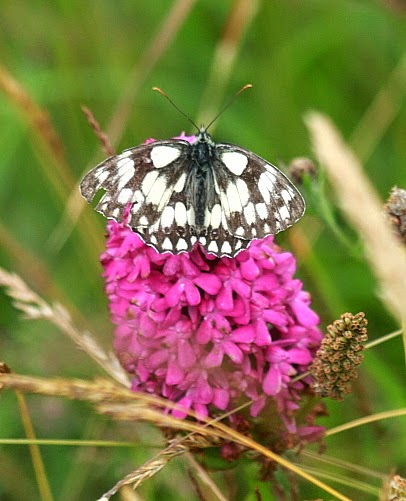 Marbled White on a Pyramidal Orchid.

Stock Dove: 2014: Spring: 5/4 Two feeding in field opposite B/T wood, 5/5 3 feeding along the road from Birling to East Dean and 1 seen here on the 15/5 which suggests local breeding, One heard singing at Birling on the 16/5. Didn’t check out their normal breeding sites up Long Down or on the cliffs below Holywell to Cow Gap.

Wood Pigeon: 2014: Spring: None recorded arriving in off the sea, but a party of 25 E high over Shooters Bottom on the 15/5 appeared to be on migration. Otherwise reasonable numbers seen around the Headland.

Turtle Dove: 2014: Spring: Just two singles were seen, the first on the 14/5 when one flew over Birling and the second on the 31/5 drinking from a puddle in the overflow car-park at Birling.

Collared Dove: 2014: Spring: Recorded on 7 dates from 31/3 (1) to 6/6 (1). A total of only 11 individuals logged with a daily max. 3 on the 14/5. Virtually all are seen flying over the lane at Birling and they often attract the attention of the local Peregrines. This species is present in East Dean village which is just out-side our recording area.

Cuckoo: 2014: Spring: 7/5 One possibly two were seen and heard in Shooters Bottom, RHC reported that he hadn’t seen or heard any from Hodcombe by mid May.
In Spring 1968, it was recorded on 36 days in total.

Tawny Owl: 2014: Spring: In March to May, singles were seen in Belle Tout wood on 15 dates which included both rufous and grey colour phase birds and on the 23/5 two Tawny owlets were present in the wood. A dead bird was reported in the gorse area above Belle Tout wood after a severe storm in April but no other details. The usual pair were reported from Whitbread Hollow on the 24/4.

Short-eared Owl: 2014: Spring:  A single arrived high in off the sea on the 21/4, and then flew along the cliffs at Birling before departing back out to sea @ 09.40 hours. It was later seen coming in again over Seaford Head. 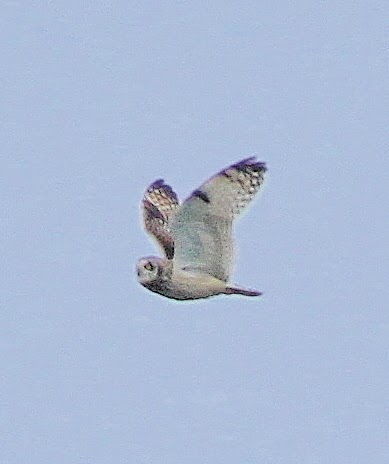 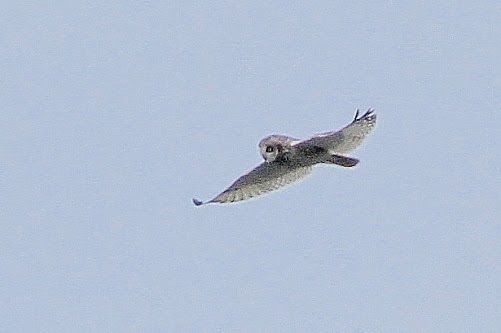 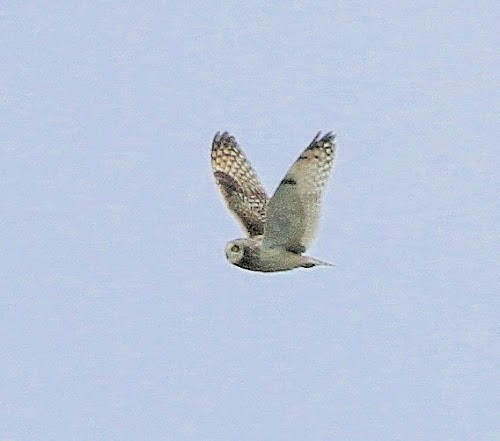 (taken by John Cooper)
Short-eared Owl arriving in off the sea at Birling on the 21st April. 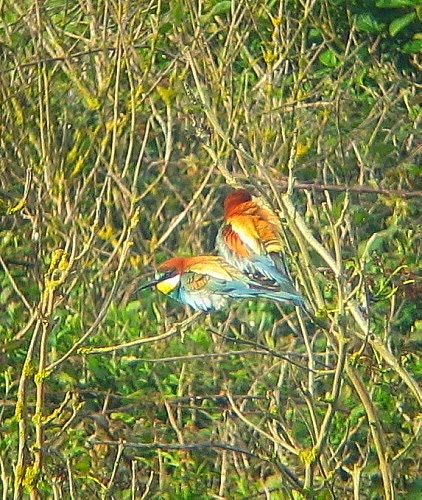 (taken by Nigel Taylor)
Two of the five Bee-eaters present for a short period in the
Belle Tout area on the 20th May.

Swallow: 2014: Spring: : Recorded from 9/3 with 1 at Hodcombe. Recorded regularly from 5/4 when 1 came in off the sea. Generally Swallow numbers were low this Spring with 75 birds seen arriving in off the sea during our Spring sea-watch season, with 30 in off the sea on the 30/4 and 15 in off the sea on the 26/5. The daily max for the Headland was just 40 on the 12/5. A number of observers also reported very low numbers seen this Spring at Beachy. Breeding population was probably down to just 6 pairs, although a few more may be present around the downland farms.
The 9/3 would appear to be our earliest recorded date since regular watching commenced in 1960, generally a poor Spring for numbers of Swallows seen. 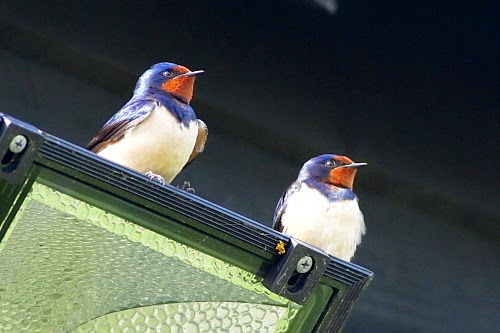 (taken by John Cooper)
Pair of Swallows resting on the outside lights at the Beachy Head Hotel.

Raven : 2014: Spring:  Recorded throughout the Spring, with 2 pairs present, with family parties seen of 5  over Hodcombe on the 21/5, and 8 were seen on the 25/5 including a party of 6 over the Old Trapping Area.
Between the years 1960 to 1998 we had only recorded Ravens on the odd occasions with a single bird lingering during 1976 and 1977, and then another single bird reported on the 6 April 1997, although they were a regular breeding species during the 19th Century. During 1999, three were present on the Headland for 2 weeks in the Spring which gave hope that they may return to breed and breeding was confirmed in 2001. 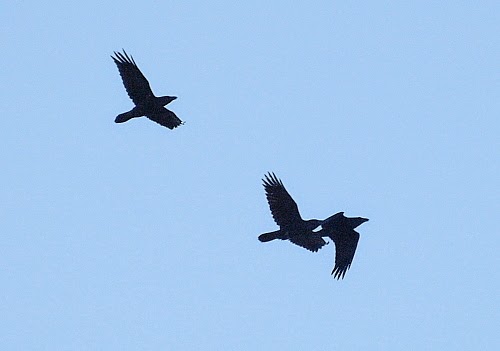 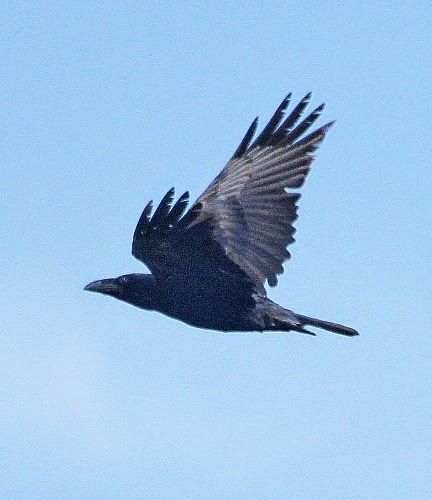 (taken by John Cooper)
Ravens are now a familiar sight and sound over the Headland,

Wren: 2014: Spring: After one of the mildest winters on record with no prolonged cold spells, the number of Wrens during the Spring heard singing and also seen was encouraging on the Headland. On the 17/3, 5 were logged from the Head and  estimated probably around 10 breeding pairs judged by a decent scattering of singing males during the Spring. It will be interesting to see how many are trapped in the Hollow during the Autumn.