We arrived to misty conditions and strong SW breeze. Sea-watched from 06.30-07.00 until the fog rolled in and very little seen although another juv. Yellow-legged Gull E.
With foggy conditions over the Headland, we headed down to Whitbread Hollow, Gully and Cow Gap. Although the area was generally quiet, we had a Greenshank calling, 2 Whinchats (ad and juv) and a juv Cuckoo. Again just a few butterflies seen including 2 Chalk Hill Blues. 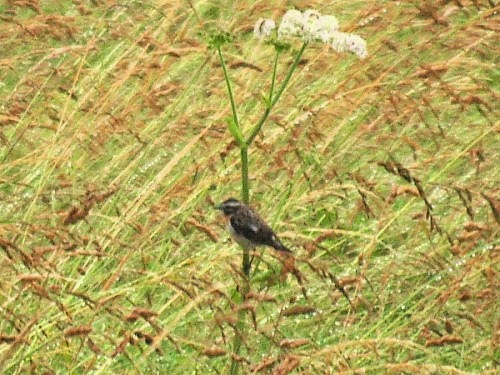 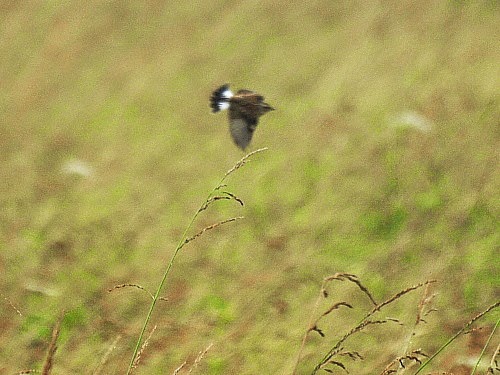 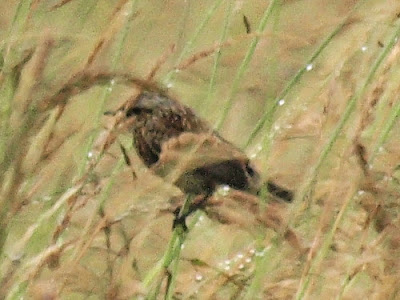 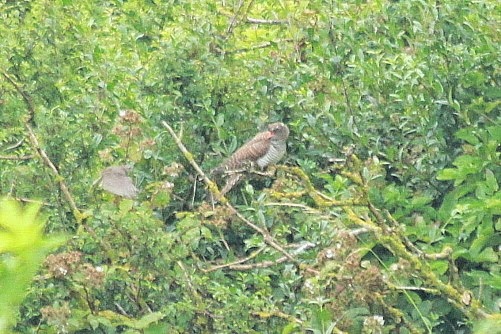 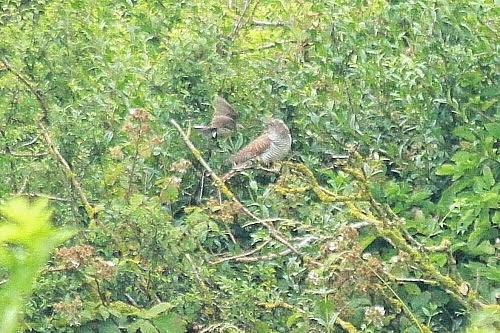 Distant shots of a juv. Cuckoo being mobbed in Cow Gap. 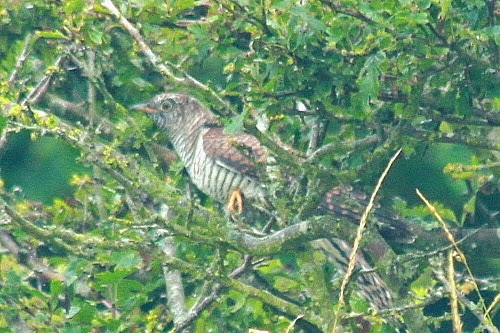 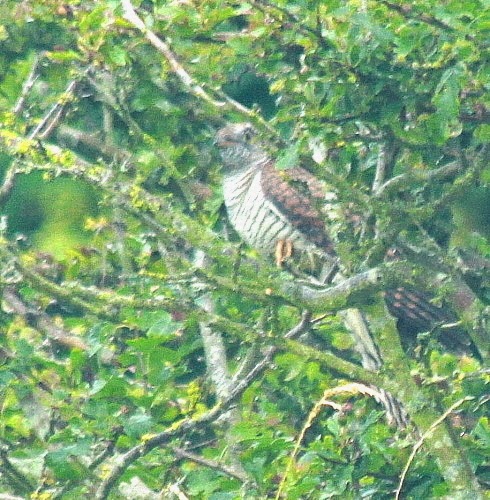 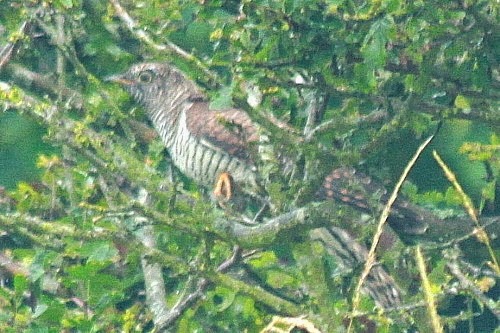 Mistle Thrush, Fieldfare and Redwing: 2014: Spring:  Not a single record logged during the first 6 months, for these three Thrushes.

Song Thrush: 2014 Spring: Due to the very mild winter, no hard weather movements were recorded.
Spring: Just very small numbers recorded throughout the Spring but never more than 3 on a day and no influx's logged. 3 pairs appeared to breeding in our area, with odd birds heard singing throughout the Spring, adults seen carrying food and the odd juv. seen in the area.

Blackbird: 2014: Spring: No influx noted and numbers remain low with no more than 12 were logged on a day. Several pairs bred on the Headland. 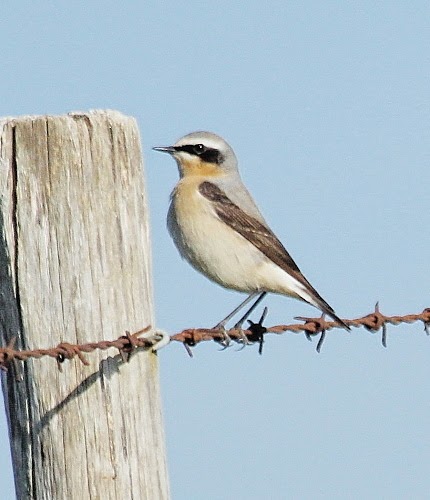 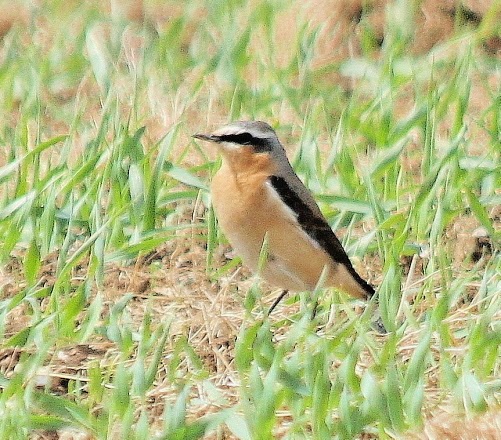 Stonechat: 2014: Jan and Feb: After one of the mildest winters on record, and with no long cold spells recorded,  odd birds were seen during our few visits during the winter although no more than 2 on a day.
Spring: Passage commenced on the 1/3 when 3 females were logged, and then recorded on virtually every visit with up to 10 birds on a day. It was pleasing to report that probably 10 pairs bred this year at various sites on the Headland and Cow Gap area, and the first young seen out of the nest was on the 6/5 when 2 pairs had flying young.
A striking male with a large white rump bred in Hodcombe and was considered to be rubicola race and reared 4 juvs, with the female appearing quite dark looking and may very well have been the pair which bred last year in Shooters Bottom.
After the severe winters of 2011/12 and 2012/13, when the breeding population in 2013 fell to just 4 pairs, it was encouraging that it had increased to around 10 pairs this year, and fair numbers of juveniles have been seen. 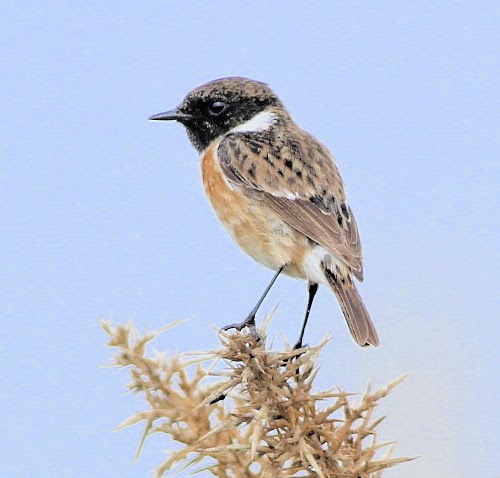 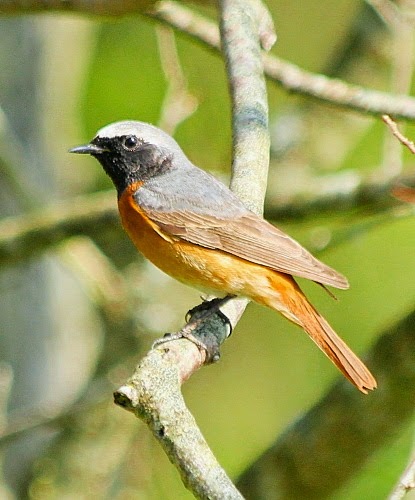 Black Redstart: 2014: Jan and Feb: From the 31/1 to 4/3, a female type was present around Birling and Mr. Nash who lives in the bungalow directly behind the car park, reported its present in his garden on a number of occasions during Feb. We  last saw it on the 4/3 in the car-park.
Spring: Migrants were recorded on 9 dates from 6/3 (1 in Hodcombe) to 1/6 (1st S. male singing at Birling). A total 12 bird-days logged (although RHC considered that he probably had 10 different birds in Hodombe during the Spring although only female types were seen). Probably allowing for Hodcombe records, probably a total of around 12-15 different individuals were seen on passage during the Spring. 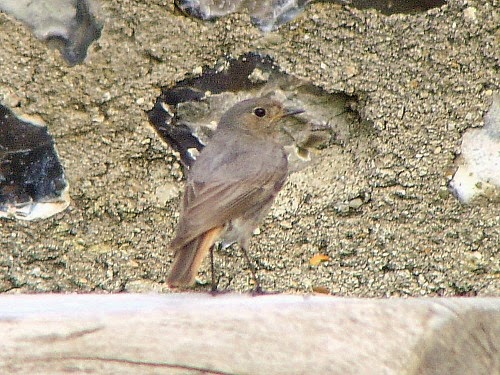 Nightingale: Sadly, for the second year running no sightings or song recorded during this Spring.

Robin: 2014: Winter and Spring: After one of the mildest winters on record, with no real long cold spell, Robin numbers were reasonable with birds being recorded throughout the Headland. The gardens up the lane at Birling hold a reasonable population all year, and on the 14/3 8 were logged chiefly from Birling and territorial disputes were regularly seen. Several pairs bred in the vicinity at Birling with odd pairs in Shooters Bottom and no doubt at other sites, and a number of juvenile birds were seen during the breeding season.


Garden Warbler: 2014: Spring: Recorded from 28/4 (1 in Shooters Bottom), with a daily max of 5 on the 13/5. An interesting Spring for this species as at one time 3 singing males took up residence in Shooters Bottom, although 2 departed after a day or two, one stayed for around 3 weeks before it departed or just stopped singing. In Whitbread Hollow, probably 3 pairs took up breeding territories.

Common Whitethroat: 2014: Spring: Recorded from 10/4 (1). Small influx occurred on the 12/5 when 40 were seen on the Head, unfortunately Whitbread Hollow was not covered although the Cliff Path was checked with reasonable numbers being seen, these have been included within the 40. An estimate of 35 pairs bred. 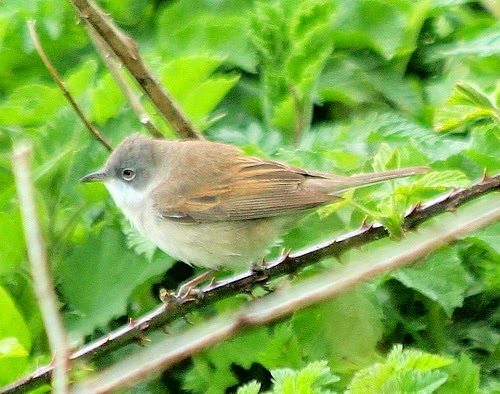 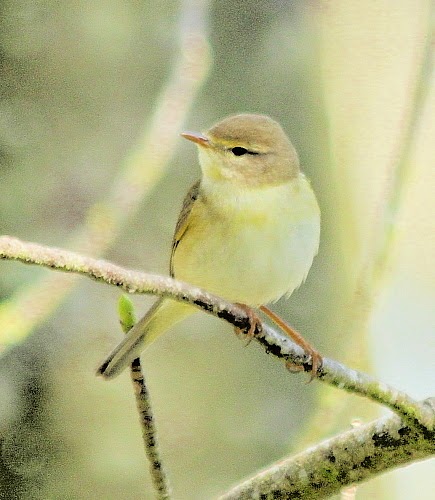 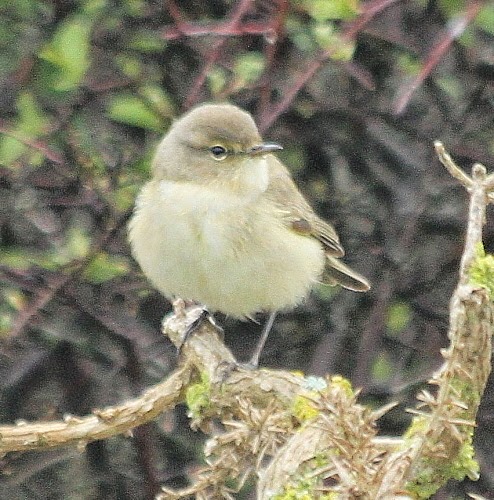 (taken by John Cooper)
Chiffchaff in the Hotel Garden, April, 2014.