Blast from the Past No. 2

Four species of Hippolais Warblers have been identified at since regular watching commenced in 1960 and these are detailed below.

There have now been 20 different records of this species between 1960 and 2009, of which 2 have been recorded in the Spring and 18 during the Autumn.

The first was trapped in Whitbred Hollow on the 5th September, 1965 by Barry Cooper, Tony Quinn and Mike Nolan and proved to be the first for .

The two Spring records are as follows: A singing male found in Whitbred Hollow on the 27th May, 1967 and was trapped and ringed the following day by Peter Clement and Peter Kenward, and the second was found by Roger Charlwood in Hodcombe on the 23rd May, 1989.

Autumn sightings have been recorded between the 9th August to the 30th September with the majority of the sightings during the second half of the August. On the 24th August, 1970 one was trapped by Roger and Liz Charlwood in Hodcombe and was also seen by John Cooper. Later the same day John also found an unringed bird in the . This is the only occasion when 2 different birds have been seen on the same day on .

On the 23rd August, 1973 one was trapped during the first round of the mist-nets in Whitbred Hollow by John Cooper, Bob Smith and the late Brian Whitby. John had to quickly wake Roger Haggar from his nights sleep so Roger could obtain an overdue tick.

Sadly, in recent years this species has declined at . An analysis of the Beachy Head logs etc, have shown that there were 3 sightings in the 1960’s, in the 70’s there were 9 sightings, in the 80’s 4 sightings, in the 90’s 3 sightings but only 1 sighting in this current millennium up to 2009. This last sighting was found by John & Doreen Cooper in scrub along the western end of the Cliff Path opposite the Beachy Head Hotel on the 30th August, 2006. Although very elusive, it stayed in this same clump all day and was seen by many observers including Bob Edgar, Richard Fairbank, John King, Ian Barnard, & Matt Eade, and proved to be a life tick for many of these observers.

Any observers still requiring this species for their life list will probably be advised to search for this during the period of South Easterly winds during the 17th to the 28th August when a total of 11 of our sightings have occurred. 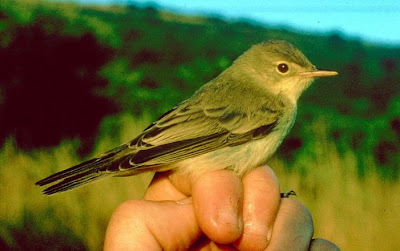 Icterine Warbler trapped in Whitbred Hollow during the 1970’s and taken by the late Brian Whitby.

There have now been 29 different records of Melodious Warblers seen at between 1960 and 2009, with 6 records in the Spring and 23 recorded in the Autumn.

The first one during the period of regular watching from 1960 onwards, was trapped by the late D.D.Harber at Holywell on the 23rd August, 1962. ( He also trapped one at this site in 1958).

The six Spring records have occurred between the 10th May and 11th June, with the majority occurring in May.

Autumn records have been recorded between 15th July to the 4th October, with one bird seen in July, 11 birds in August, 9 in September and 2 in October.

The very early date in July, this bird was present on the 15th & 16th in Hodcombe and was seen by Roger & Liz Charlwood. During the Autumn of 2001, three birds were recorded, being our best year to date, including a 1st Yr. ringed individual in the Hotel Garden on the 10th & 11thAugust and further 1st Yr’s were trapped in Whitbred Hollow on the 18th & 26th August. 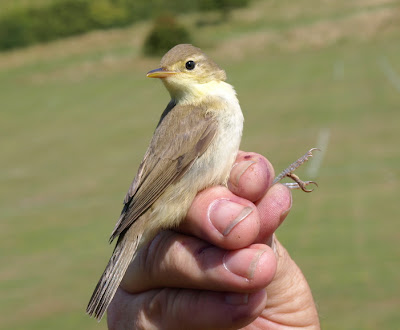 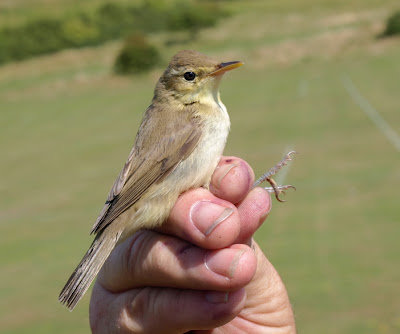 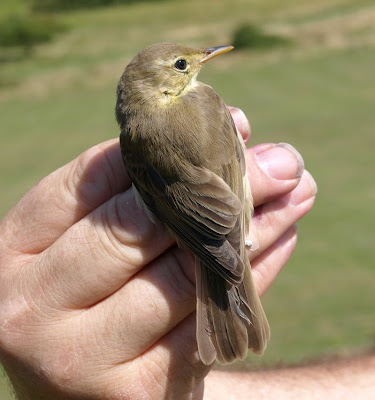 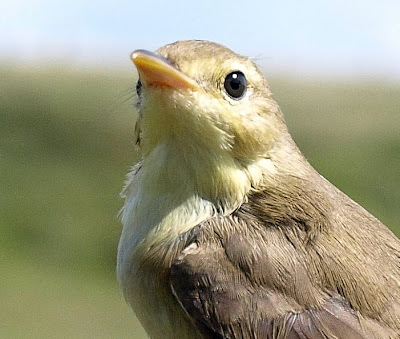 First Year Melodious Warbler trapped on the 22nd August, 2008 by Bob Edgar & other members of the BHRG.( photographed by John Cooper).

Our only sighting was on the 5th June, 1994, when a singing male was discovered in Cow Gap, by John & David Cooper. It was discovered at 07.20 am and gave good views as it moved around on the eastern flank of Cow Gap singing almost non-stop. At 07.35 a local pair of breeding Common Whitethroats started to chase the Booted Warbler away from their breeding site and it departed over the eastern ridge of Cow Gap and it could not be re-located.

Martin Casemore & Dick Eyre-Walker found a small pale warbler feeding in a weedy patch on the eastern side of Whitbred Hollow on the 31st August, 2002. Their initial thoughts were of an Olivaceous Warbler, but after some good views they considered that it was probably a Booted Warbler. They kindly left a note on one of our cars and Richard Fairbank and David Cooper both went into the Hollow to try to re-locate it. After an hour they noticed a milky-tea coloured warbler in an elderberry bush. They both agreed that although it looked very similar to a Booted Warbler it didn’t look quite right, being more Acrocephalus like rather than Phylloscopus like. They considered that it might be a Sykes’s Warbler and they immediately contacted a number of local birders included John Cooper, Roger Charlwood, Bob Edgar & Ian Barnard. It remained on show for the rest of the day giving good views. Les Bird was able to obtain a good series of photographs, and I have included the full set of these photographs below. Unfortunately, there was no sign of it the following morning after a fine clear night. It proved to be the first for and the first British record to be accepted without being trapped. Full details of this exceptional record can be found in Birding World Volume 15 pages 378-380. 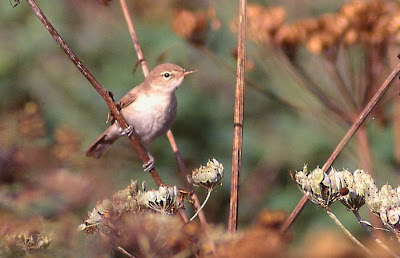 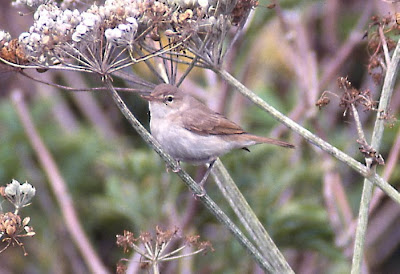 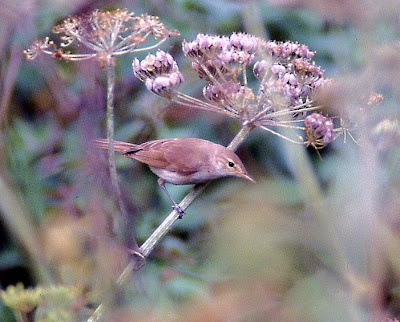 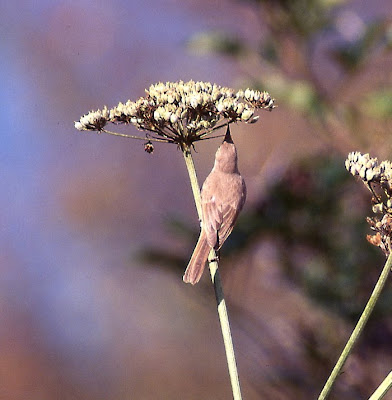 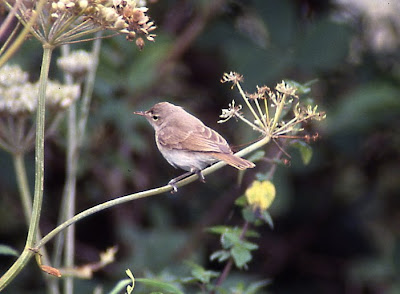 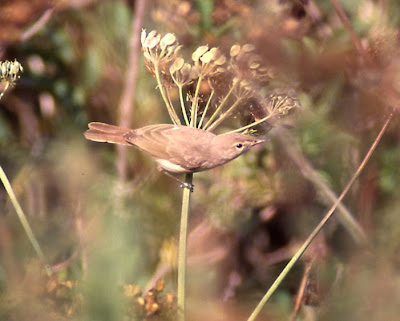 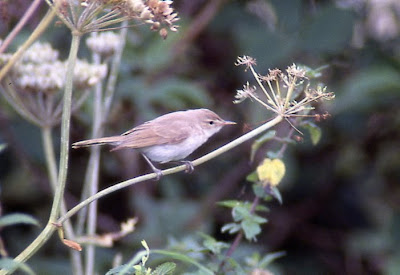 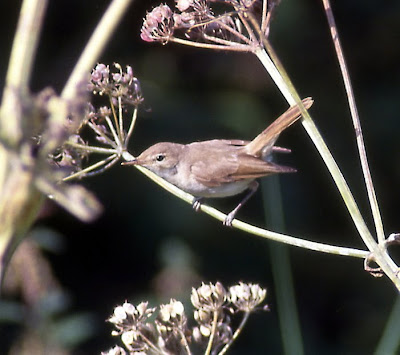 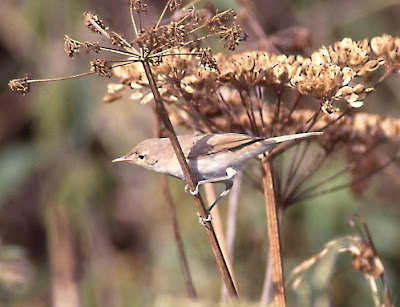 Sykes’s Warbler in Whitbred Hollow on the 31st August, 2002. (photographs were taken by Les Bird).

We must now hope for our first Eastern Olivaceous Warbler, with a pumping tail etc. to complete the set.