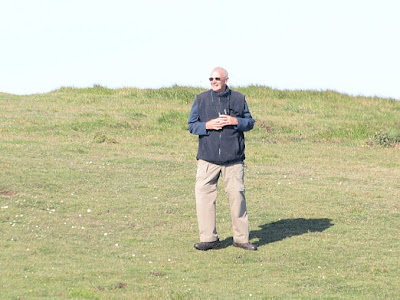 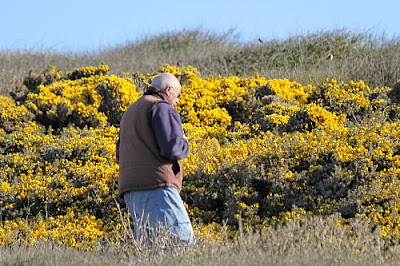 
We heard yesterday of the sad loss of one of Beachy birding stalwarts Pete Neatherway, who after visiting Beachy during the morning with his wife Mim, returned home at lunch time for a snack and a rest. Pete then died peacefully in his sleep.

Pete and Mim returned from South Africa some 27 years ago after a period of working 11 years out there, and chose to live in Eastbourne, becoming very frequent visitors to nearby Beachy Head. We first met Pete and Mim on almost their first visit to Beachy when they were keen to see a Ring Ouzel, and we pointed them in the right direction to see one, and became good friends from then on. Pete was a birder who enjoyed walking the Downs between the Old Trapping Area to Birling Gap revelling in looking for and finding passerine migrants that over the years included both Subalpine and Pallas's Leaf Warblers. He never really took up sea-watching from Birling as he spent some of his time in South Africa doing sea-bird pelagic trips watching and even catching Albatrosses for ringing purposes. That said, he had a wonderful uncanny knack of turning up just at the right time at Birling, and this year alone, despite probably only spending just a couple of hours sea-watching all Spring at Birling, he saw the Red-breasted Goose which passed along the Sussex coast, just happened to appear when the White-billed Diver spent a few minutes on the sea, using my scope to view this, a lifer for him, and also turned up on our best day ever for Poms moving past seeing a number of packs.

Whenever Doreen and myself  met up with Pete and Mim, Pete always had a wonderful smile, a hug for Doreen and a fierce handshake with me which usually left me flinching. After his retirement in 2007, we spent many mornings birding the area with Pete who was superb company. Pete always welcomed and spent time talking to new birders on the headland and never had a bad word to say about anyone. He was a loyal supporter of Arsenal Football Club, and in recent years had to take many jibes from ourselves at their recent form, but this always ended in a laugh. His many birding friends at Beachy will miss him greatly.

Our thoughts now are with his wife Mim, who herself has been through some difficult health hurdles this year with a spell in hospital in February and has just finished a course of hospital visits only last Thursday.