Carrion Crow
2017: Strangely, only 1 was seen coming in off the sea on the 27/3 during the Spring sea-watches. Last year a total of 24 were seen arriving in off the sea. Usual breeding numbers scattered over the Head. A party of around 20 birds were feeding with the Jackdaws and Rooks in the set-a-side field on the 25/11. Per B.H. Log.

Jackdaw
2017: Good numbers again present throughout the year. On the 20/8, 74 were seen in the Hollow, which is a large number for this location, and in November, 250+ were feeding in the set-a-side field at Cornish farm with Rooks, Carrion Crows etc. Per B.H. Log.

Rook
2017: 1/3 c200 flying over the East Dean rookery. Around 300 were feeding with Jackdaws and Carrion Crows in the set-a-side field near Cornish farm in November. Per B.H. Log.

Raven
2017: Recorded throughout the year with again 2 pairs breeding, one along the Seven Sisters and the second on the cliffs opposite the Old Trapping Area. On the 13/5 a family party of 5 were seen at Birling and this brought the pair from along the Seven Sisters to investigate this family party. In July, A family of 4 were feeding on top of the cliffs opposite the Old Trapping Area and they allowed very close approach to within a few feet. Perhaps the same family party of 4 were present on the cliffs at Birling in December. Per B.H. Log. 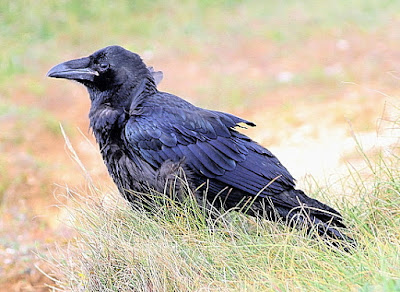 House Sparrow
2017: A reasonable breeding population established at Birling and several pairs present at Hodcombe. During the summer months numbers increased at Birling due to visitors feeding them at the visitors centre with up to 40 present around the car park, but then decreased back to around 25 later in the year.  Per B.H. Log

Greenfinch
2017: Spring: 27/4 1 in Hodcombe and RHC had seen odd birds recently in Hodcombe. Autumn: Up to 4 recorded on just 7 dates from 23/7 to 7/8 and all in Whitbread Hollow. These were considered to be a family party and may have well bred in the Hollow.
Long gone are the days when we regularly recorded 300 Greenfinches in the early Autumn feeding in the Cow Gap gully. Per B.H. Log.

Goldfinch
2017: Jan-Feb: A feeding flock of up to 80 birds were present in the set-a-side field opposite Belle Tout wood recorded throughout this period on five dates from 3/1 to 24/2.
Spring: No overhead migration observed, but reasonable numbers seen all Spring ie 60 on the 21/4 on the Headland. Almost the commonest bird during the breeding season with up to 25 breeding pairs estimated.
Autumn: (JFC was away from mid-Sept to mid-Oct, which is the main passage time for this species). In July and Aug up to 40 birds seen regularly and good numbers of juveniles were present, suggesting a good local breeding success. Passage was only logged after JFC returned in Oct. From the 14/10 to the 3/11, a total of 2,520 moved over the headland. On the 18/10 700 E between 07.40- 08.40, on the 20/10 1,000 overhead in 7 hours. On the 25/11 a flock of 40 were feeding in the set-a-side field near Cornish Farm. Per B.H. Log and SOS web-site.

Linnet
2017: Jan-Feb: The flock present in the set-aside field in November last year was still present this year in varying numbers with 30 seen on three dates in January, 60 on two dates in February and 60 still present on the 15/3. The field was then ploughed.
Spring: No diurnal migration logged. Good numbers present throughout the Spring with the breeding population similar to last year of around 60 pairs.
Autumn: Present most of the Autumn with 60 on the 20/8. Very little passage logged with 60 W on the 25/10. A walk through the set-a-side field on the 25/11 produced only 6 birds feeding in the field. Per B.H. Log.

Yellowhammer
2017: Jan-June: Recorded on 9 dates from 17/1 (4 in the B/T area) to 28/4 (1 in the B/T area).  During the early months, the set-aside field opposite B/T wood was attractive to Buntings and odd Yellowhammers were seen here, although none were seen after the field was ploughed. In July, I discovered a male collecting food and watched it on several occasions visiting a nest site in the gorse above Belle Tout wood, and on the 5/8 there was a single juvenile near the breeding site.
Autumn: 29/8 1 male on the Cornish farm track, 25/9 1 on the Headland and 5/11 2 males in the scrub by Belle Tout scrub.
On the 22/3/1970, I carried out a survey between Beachy Head Hotel and Belle Tout wood and found 30-40 singing males. It was then considered to be a common breeding species across the whole of the headland with an estimated breeding population of 120 breeding pairs in the whole area, and on the 27/9/70 we logged 150 moving W and also exceptional numbers seen around the Cattle Field area on the Headland. Per B.H. Log. 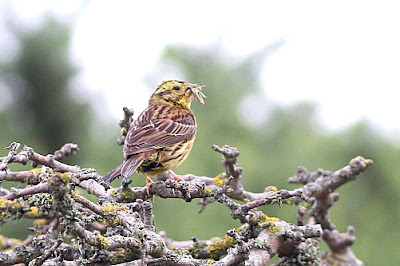 Yellowhammer collecting food for its young.
Corn Bunting
2017: Jan-Feb: During January up to 50 were recorded in the set-a-side field opposite Belle Tout wood on three dates but numbers had decreased in February with just 3 on the 14/2 and 9 on the 24/2.
Spring: Recorded throughout, with 20 on the 17/3 all in the vicinity of the set-aside field. Good numbers could be heard singing throughout the spring with a breeding estimate of 15 pairs.
Autumn: Recorded throughout the Autumn and on the 19/7 a number of juvenile birds were seen. Numbers increased in mid-October with 26 counted on the 14/10. In November, birds were present in the set-a-side field with 18 on the 18/11 increasing to 25 on the 25/11 which included a pair displaying and singing. Per B.H. Log. 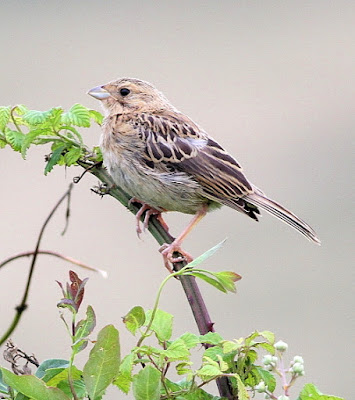