Met up with RDME and we sea-watched from 05.50 until 12.00. RHC, RKH, RES, RK and PN joined us for some of this time. We also covered Birling Lane, Belle Tout wood, Shooters Bottom and the Old Trapping Area. The highlight without doubt was a White-billed Diver which showed well on the sea off Birling before departing East. Our first ever record for Beachy and just the fifth for Sussex. A brief account appears below and some digiscope pictures taken at about 300 metres by David Cooper in mirky light.
A fine Short-eared Owl also came in from the sea, flew along the cliffs before departing back out to sea.

Brief account of the White-billed Diver off Birling Gap

Whilst sea-watching from Birling Gap, DC picked out a large diver sat approx. 300 metres out on the sea and quickly drew our attention to it. We had already seen several Red-throated and 2 Black-throated Divers on this sea-watch.

Our immediate reaction was a White-billed Diver probably in 1st Summer plumage, as it appeared as large if not larger than a Great Northern Diver, with a pale bill which it held skywards at all times and had the appearance of being upturned. It was diving and at one time caught a large fish which a nearby Greater-black backed Gull immediately poached. It also attracted a fly-by Fulmar which landed by it and which was literally drawfed by the diver.

It continually dived but after a short period of time a sailing boat came along, which unfortunately flushed the Diver which then flew around the boat before heading off eastwards and we followed it with our scopes as it flew around the Headland and was lost to sight.

Bill was pale and at certain angles had a yellowish appearance, probably when the sun highlighted this. At certain angles the bill looked huge but at other angles it didn't look quite so large but certainly always larger than the commoner divers and was always held skywards and always had a distinctive upturned appearance.
The head and neck appeared very thick and heavy with a distinctive steep forehead onto a flat crown giving a kink where the forehead joined the crown. The crown appeared quite a pale greyish brown and the sides of the face and cheeks were very pale with just a pale brownish wash and this extended above the eye, although a couple of slightly darker brown small patches were visible on the side of the head when it was side on. The eye was black and was completely surrounded by the pale face. The whole crown and face was noticeably paler than a Great-northern Diver. At the base of the neck was a thick black collar which was bordered on the upper side by a narrow whitish patch. The rest of the chin and throat were white and on several occasions it raised it self up out of the water and flapped and the remainder of the under-parts were white.

The upper parts had a brownish appearance with quite an obvious scaly appearance.

In flight it looked very large indeed, with a large bill, thick head and neck, broad wings and the whole of the upper-parts had this very distinctive brownish hue which I have never ever seen on any diver before. It had strong looking legs which trailed behind with very large feet. In flight it appeared a little ungamely which at the time I described as appearing clumsy. 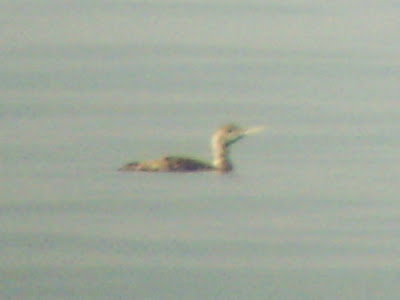 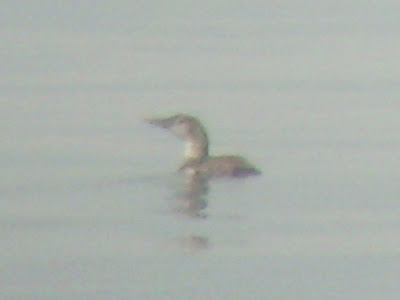 Again showing the up-tilted bill, bill appears darker in this
image due to the mirky light conditions, and the pale face 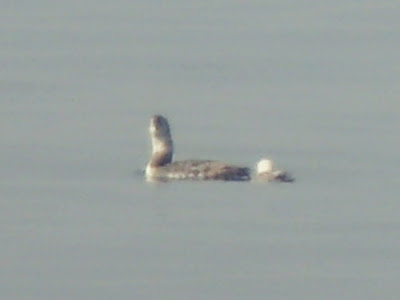 With a Fulmar, showing clearly the broad blackish collar
and how large it was compared to the Fulmar 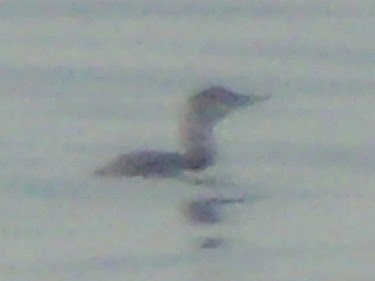 Images of the White-billed Diver off Birling Gap which departed E.
Showing the large head and thick neck and forehead bump.
These images were digiscoped at about 300 metres in mirky
light at 3x digital zoom through a 30x telescope and have been
heavily cropped. All taken by David Cooper 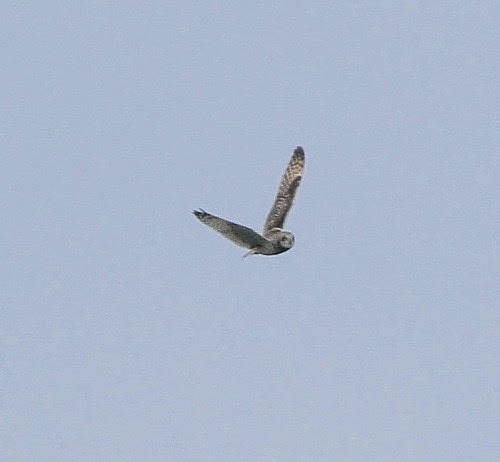 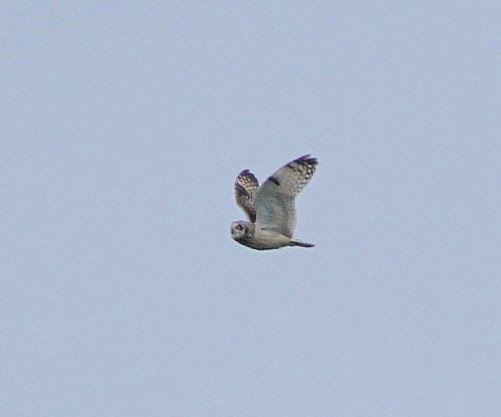 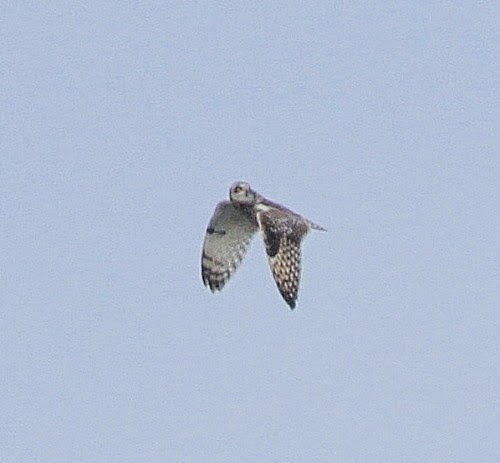 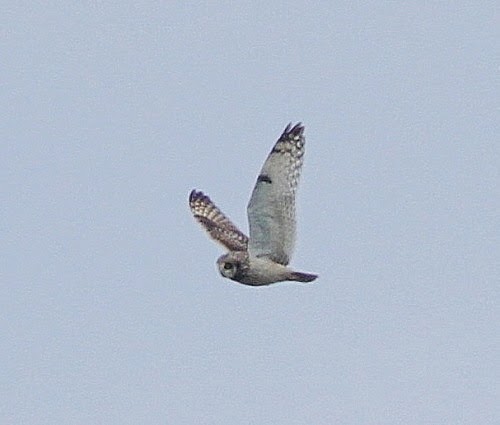 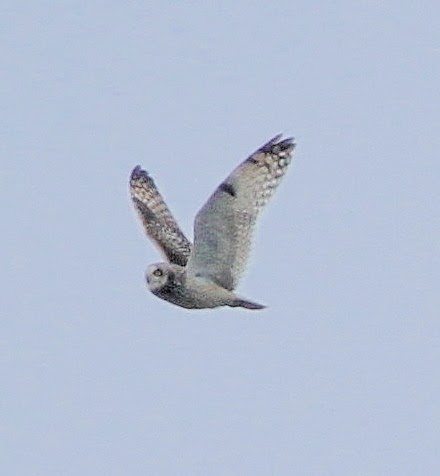 Short-eared Owl arriving in off the sea. 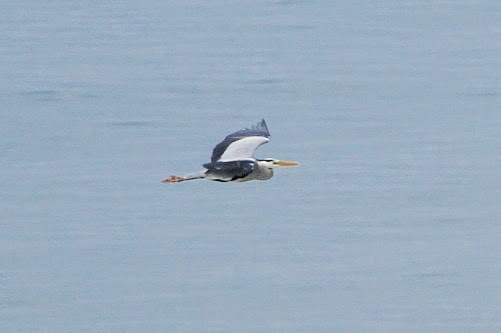 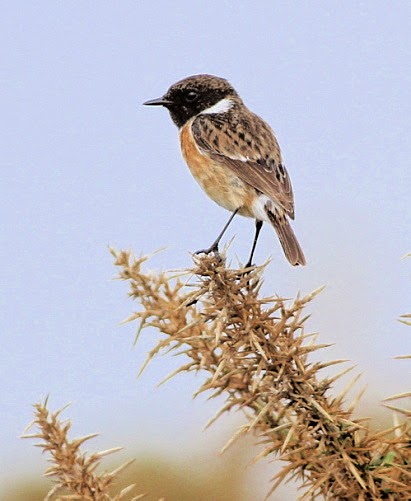 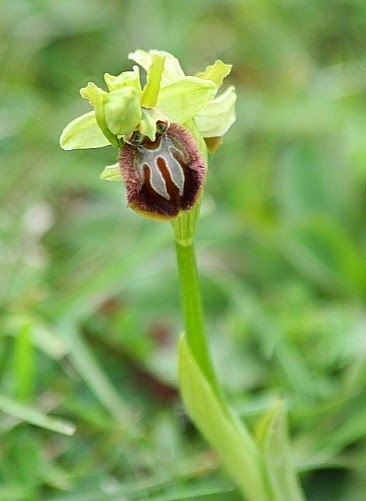